Biking in the Zillertal region 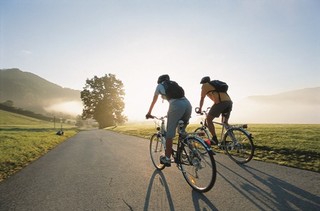 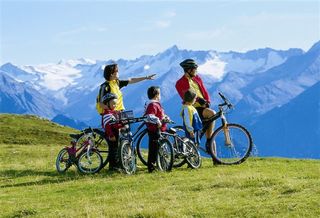 The Zillertal is an ideal bicycle and mountain bike cycling area. Over 800 km of cycling routes invite you to experience the unmistakable Zillertal mountain panoramic views from the saddle.
The lovely wide valleys provide relatively easy bicycle trails alongside the river. You will cycle through beautiful valleys and pass friendly mountain restaurants and huts while cycling along these routes. There are also many routes through meadows in the high mountains for those who prefer to cycle using mountain bikes. The various routes are well-signposted. These routes can also be found on the special mountain bike map.
This map contains all 31 bicycle paths and 23 mountain bike paths and includes an extensive itinerary. This map is available at the various Tourist Information Offices.
The well-know alpine trails and the crossing from the Gerlos Pass to Salzburg are ideal for cyclists on racing bikes. For families, the spacious, sunny and often peaceful valleys are ideal. After cycling, more than 130 huts invite you to enjoy the popular natural Zillertal products.

Several-day biking tours in the Zillertal region
In addition to enjoyable excursions, the Zillertal offers various possibilities for several-day cycling tours. These routes are clearly signposted. You can stay in various “Zimmer freis” (vacant rooms) along the route during these several-day tours. We strongly recommend that you book in advance for the high season although it is easy to go somewhere else when cycling.

The Tauernradweg
The well-known Tauernradweg starts in Krimml at an altitude of 1,100 m. The trail runs along the Salzach Passau (Krimml – Bruck – Salzburg – Zell am See/Bruck). You will see many imposing mountain landscapes and occasionally encounter a short but challenging slope during the 270 km route. One fourth of the route consists of dirt roads and the rest is asphalt. Over 90 per cent of the Tauernradweg leads you along cycling trails and secondary roads with little traffic. Touring bicycles are ideal for this trail. There are special alpine detours for those who have mountain bikes.

Mozart-Radweg: cycling trail through Salzburgerland and Bavaria
The Mozart cycling route connects many historical places in Chiemgau, Berchtesgadenerland, and Salzburgerland. The outer ring of the Mozart Radweg is approximately 450 km long. There are also connecting routes between St. Lorenz and Köstendorf, Laufen and Kössen and Bad Reichenhall and Salzburg. Covering shorter distances are possible with regard to the Mozart Radweg due to these connections.
The difference in altitude for this route is approximately 2000 metres. The entire route through Salzburgerland, the adjacent part of Bavaria and the part through Tyrol consists of cycle paths or streets with little traffic that have been asphalted for best part of the way by 90%.
If you wish to do the entire cycling tour, this will take approximately 10 to 14 days. However, the various connecting roads make it possible to shorten the tour or do only a part of it.